It is well known that MRT theory suggests to fully saturate the rope in order to obtain the maximum advantages in terms of sensitivity of inner defects.

Why? Is it the best solution? Which are the differences between high and low magnetization?

Both technologies have their own pros and cons. In this article, we will try to explain these two different interpretations of the magnetic theory for broken wires detection on wire ropes.

Since the beginning of the last century, MRT systems were used in the cableway sector to force high magnetic field in metallic wire ropes. The goal was the complete saturation along the whole rope’s cross section.

The value of magnetic flux in the internal part of the rope is fundamental for the detection of inner defects.

Dealing with low magnetizing devices, the magnetic flux moves only on the rope’s surface, as consequence there is no detection of internal defects. More specifically if the internal part of the rope is not properly magnetized the magnetic flux will not vary in presence of defects, for example it will be impossible to detect inner broken wires..

Anyway, low magnetic field devices still could be considered advantageous for some applications. Let us have a deeper look at both technologies.

WORKING IN DIFFERENT POINTS OF THE MAGNETIZATION CURVE

Magneto-inductive devices, thanks to their structure, generate high magnetic field values. It is important to note that the new EN12927 regulation sets a threshold for the magnetic flux in the rope. The magnetic induction should be higher than 1.9 T and lower than 2.3 T, consequently the system must work near the knee of the rope’s magnetization curve.

The detector, thanks to the magnets, generates a defined magnetic induction inside the rope (Fig. 1). The magnetic induction reaches values depending on the rope’s magnetic characteristic (Fig. 2), this curve has a specific nonlinear behaviour for ferromagnetic materials. 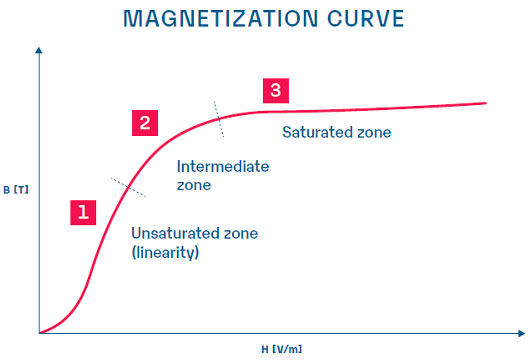 As it is observable in Fig. 2, when a low magnetic field is applied the rope will work under situation 1, in the linearity zone, thus a low magnetic flux is generated on the rope’s surface and the inner part is almost demagnetized.
The magnetic permeability of iron reaches high values in the outer part of the rope, this gives a greater sensitivity in detecting external broken wires. That happens because the difference between the permeability of the iron (rope) and the permeability of the air (defect) is high and well notable.
Of course, working in the linear zone using low magnetizing devices will not allow the detection of internal defects because the magnetic flux does not penetrate inside the rope.
Standard MRT systems work in the second zone, the knee of the magnetic characteristic, where high magnetic field is applied by the detector and ropes are perfectly saturated. The magnetic permeability still reaches a high value if compared to magnetic permeability of air, in the saturation zone (third part of the magnetic characteristic) this difference is much lower.
A properly designed MRT device should operate in this second zone, where internal and external defects can be detected and the peaks amplitude is well defined against the rope signal noise.
Low (or residual) magnetization devices are equipped with magnets with a low remaining flux density.
In this case the structure of the system is similar to high magnetization instruments, but the characteristics (or the amount) of magnets can’t guarantee the full saturation of the rope. The consequent defect detection can be summarized as reported here below:

There is also another kind of device that works on a different principle: the residual magnetism. A high magnetic field is forced inside the rope with a device called “magnetizer”. Then a second system, the detector, moves along the rope and its sensors detect the various damages. This inspection consists of two steps. In the first part the rope is fully magnetized, but when the magnetizer moves to another rope portion the main magnetic flux disappears. Only a residual magnetism remains inside the rope and it is taken over by the detector looking for broken wires.

Those systems are easily recognizable due to their lightness (only the detector) and their plastic components, but they cannot detect internal broken wires, the residual magnetic flux is too weak to give sensible variations. Due to the strand geometry, it is not possible to establish the difference between the noise and the defect. All the tests done by residual magnetization tools failed to pass the EN12927 certification.